via Instagram http://instagram.com/p/im3iD8J-Jr/
Posted by Youngsters Theology at 5:36 PM No comments:

So a few months ago I decided that I did not do very well with staying in touch with what was going on in the world.

Naturally, instead of watching the news more of reading the paper, I downloaded an app.

Man, I am so hip with technology…

I don’t know how many of you out there have these apps or get these updates but it has been one of the most depressing things.

I remember the first update I got.  “42 die in boat crash in Italy.”

It seems that every single day, something bad happens.  Why does this continue to happen?!

Many times people turn to God when bad things happen and ask “Why? Why do you allow this to happen?”

One time I was reading something articles on this topic and ran across a picture.  A meme if you will.

What great and wonderful message can you get from a meme you may ask.

There was a man sitting on a bench talking to Jesus.  He asks, “Why do you allow all of these horrible things to happen?”

Jesus’ response, “That’s funny.  I was going to ask you the same thing.”

I think it is perfectly natural and normal to question and to be angry when something bad happens.  Yes, it is natural to blame it others as well.  It seems that a lot of times when you don’t know who to blame, we blame God.

Why did you allow this happen?!

As Christians, we are called to do many things.  As Episcopalians, we are allowed to believe a great number of things.

One thing that many people believe is that some people are just born bad.  That they were created with an innate sense of evil and are destined to do bad things.

This is a concept that I strongly disagree.  I remember in one of my elementary school science classes we learned the principles of Causality.  If one thing happens, that directly causes something else to happen.

A few weeks ago, Rabbi Micah Greenstein came to be a guest speaker at our church.  A few of his words really stuck out to me and that is what I want to leave with you today.

That one sentence has remained with me for weeks since hearing Rabbi Greenstein say it.

There are plenty of problems hear in the city of Memphis.

In cities with a population of 500,000 or more, Memphis is the 3rd most dangerous city in America.

Ranked 2nd when it comes to Violent Crimes.

80% of the bottom ranked schools in the state of Tennessee are located in Memphis.

Did you know that more than 50% of 3rd graders in Tennessee can read at grade level?

So when you look at these statistics and we see that we have a lack of education, we have a lot of crime…there is a lot of work that can be done here.

In a city that has over 2,000 churches in it, where many of these places go off to other cities or countries to do week long mission trips.  Which is great, but what about the other 51 weeks in the year where you are not there to help.

The place that we are needs helps.

What can we do to help?

We don’t have to go very far to make a difference.

So when we ask ourselves, why does God allow these bad things to happen?

Instead, look around and ask, what can I do to help make a change?
Posted by Youngsters Theology at 1:59 PM No comments:

via Instagram http://instagram.com/p/h9hYzfp-Jc/
Posted by Youngsters Theology at 4:06 PM No comments:

via Instagram http://instagram.com/p/h9WrQ4J-JT/
Posted by Youngsters Theology at 2:18 PM No comments:

via Instagram http://instagram.com/p/hzGvr_J-JF/
Posted by Youngsters Theology at 2:54 PM No comments:

Neato and I spent 3 hours cleaning...i bet 20 high schoolers can undo it all in 10 mins tonight at WoW. Which starts at 6:30. #blessed

via Instagram http://instagram.com/p/hy50jvp-Fj/
Posted by Youngsters Theology at 1:06 PM No comments:

The Episcopal Church...according to a high school senior

My, my has it been a cold week!  Hope everyone has kept warm and kept their power during the weekend.

In the past I have shared stories about growing up as a proud Episcopalian.  Claiming it proudly and wearing all my Episcopal “swag” whenever possible.  If you are wondering how much Episcopal apparel can someone really own; the answer is a lot.  Belts, keychains, multiple sweatshirts, hats, bumper stickers, license plates, and more t-shirts than I know what to do with.  I even currently have a 4’x 7’ Episcopal flag hanging in my office.

All that being said, when I went to college and I was asked to describe what it meant to be Episcopal…I was speechless.

I just stuttered and ummmm’d and said a few things but the more I thought about it the more I realized I didn’t know.

Yesterday, one of the seniors in our youth group told me about how they were writing a paper for school about how much he loved the Episcopal Church and its beliefs.  Today they sent me a copy of that paper and was delighted to read it.

One great thing about the Episcopal Church is how open and loving we are.  Even ask Robin Williams!  If you did not know, Robin Williams is one of the many famous Episcopalians.  In one of his comedy bits, he names the top ten reasons to be an Episcopalian.  What was number 1?

“No matter what you believe, there’s bound to be at least one other Episcopalian who agrees with you.”

Such a true statement!  So to change things up, instead of me talking about my thoughts on the Episcopal church, I have decided to let the words of our youth say why they love this church so much.


This branch of Christianity has affected me in such a way that it shapes the man that I hope to become. I aspire to be accepting, understanding, and open. However, I don’t want to reflect these qualities only when concerning religion, but also I want to display them in everything I do.
Posted by Youngsters Theology at 3:37 PM No comments:

via Instagram http://instagram.com/p/hwU5EhJ-Gb/
Posted by Youngsters Theology at 1:06 PM No comments:

via Instagram http://instagram.com/p/ho66Orp-ED/
Posted by Youngsters Theology at 4:06 PM No comments:

via Instagram http://instagram.com/p/hexWGDp-Pi/
Posted by Youngsters Theology at 5:39 PM No comments:

Putting the Christ back in X-mas....?

Put the Christ back in Christmas!

How many times have you heard this?  How often do you see stickers or Facebook posts claiming to put the “Christ” back in Christmas?

Or have you ever seen someone write this… “Merry X-mas”

There have been many arguments against the abbreviation of Christ to “X” and about how Christ has been lost in the very season that we celebrate his birth.

Well, I am here to argue also.

First I will start with the “X-mas”.

Many people believe that the abbreviation of Christ to an “X” is a fairly recent occurrence.  And in today’s society many people find the “X-mas” offensive.

Well, did you know that the letter x has been used as a symbol for Christ since around year 300?

It comes from one of the first christograms.

Have you ever seen this image before? 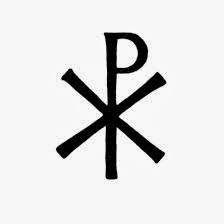 This may be a symbol that we see all over the place yet never asked ourselves what it meant.  Well, this symbol is called the Chi Rho.  This image comes from superimposing the first two letters of the Greek word for Christ ("ΧΡΙΣΤΟΣ").  The symbol was designed to invoke the crucifixion of Jesus and also to represent the status of Christ.

Hmmm…that is an interesting point.

Now, it is my personal opinion that it is up to you to decide what you believe.  If you believe that using X-mas is offensive.  I have no problems with that.  However, I will ask that you understand where these things come from and truly understand the meaning why things are done.  Knowing what we now know about the Chi Rho, does it make a little bit of sense way X-mas can make sense?

Now onto the other point…

Put the Christ back in Christmas…

I do believe that consumerism and materialism have become so over powering that many people do not fully understand the meaning of Christmas.  What the holiday means and why we celebrate it.

But if we take a step back, is this a problem that we only encounter during the Christmas season?

As Christians we are called to live and show the love of Christ to everyone, at all times, no matter what!  Notice how I said “at all times” not “during Christmas”.

Yes, we can argue that Christ has been lost when it comes to the Christmas season.  But if we take a look back at the events of last week…one day we gather with family and friends and give thanks for all of the wonderful blessings in our lives.  We bless what we have and give thanks.

One comment I read really hit me this past week…

Black Friday- because only in America people trample each other for sales exactly one day after being thankful for what they already have.

Then we forget it and keep living our lives the way we want to, not the way we know we are suppose to.

Let’s all strive to DO better…not just say better.

Stop only doing the talk, but do the walk.

I say let’s try putting the Christ but in Christianity…

It’s to live it.
Posted by Youngsters Theology at 4:53 PM No comments:

The best way to spread Christmas cheer is singing loud for all to hear!

via Instagram http://instagram.com/p/heRKSkJ-Et/
Posted by Youngsters Theology at 1:11 PM No comments:

Have you signed up yet?

via Instagram http://instagram.com/p/hYupwpp-PA/
Posted by Youngsters Theology at 9:12 AM No comments: