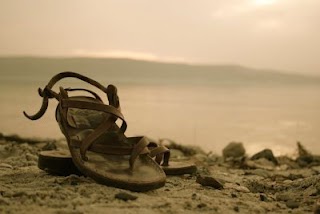 This past week the Gospel reading comes to us from John.  It is the story of Jesus calling Philip and Nathanael to be his disciples.

Now the stories of Jesus calling the disciples have always been a very fascinating story to me.

You have these guys who are out fishing, because that was their job.  They are fisherman.  They are learning the family business from their dad.  And then this guy comes walking down the beach and says “Come follow me.”

Imagine this…you are at work.  Doing your job that you get paid to do….and I go walks up and simply says, “Come follow me.”

Would you give up everything, drop what you are doing; QUIT your job….just to follow this person…

To better understand…we have to understand what life was like in year 100 AD….2,000 years ago…

Let’s go back and take a look…

At this time, one of the most important things was education.  From a very young age, usually around 5 years old, all Jewish boy would attend school where they would memorize the Torah.   You know, NBD…Just have a 5 year old memorize the first FIVE books of the Bible.  They would spend around 5 years working on this until they had Genesis, Exodus, Leviticus, Numbers, and Deuteronomy …all 79,847 words…memorized.  This was called Bet Safar or the House of the book.

The next level of education was known as bet Talmud or House of learning.  In this class they would continue learning the Bible.  Now that they had the Torah memorized…now that started to memorize the rest of the Old Testament… the Psalms, all the stories of the prophets, everything.  By age 14, these best of the best students would have the whole Old Testament memorized!

I mean…they knew their stuff!  Front and back, back and front…all by the age of 14!

So up until now you have just about all Jewish boys go Bet Safar and learn the Torah….only the best of the best continue to Bet Talmud….

Just like today’s priests, the rabbi’s of the time would interpret scripture differently.  While one may think a certain passage meant one thing another may think it was slightly different.  Once they had the Old Testament memorized, they would then continue with their learning from a rabbi.  They would try to learn the way in which their rabbi interpreted scripture and responded to different things.  Their job was to be like their rabbi.  They would follow them everywhere with the goal of being just like the rabbi.

The blessing normally given to these disciples was “May you be covered in the dust of your rabbi.”  This blessing comes from the fact that these disciples would follow their rabbis anywhere.  During this time, they did not have paved roads and sidewalks.  Roads were dusty.  As the rabbi walked, they would kick up dust and would cover anyone who followed closely behind.  Therefore the disciples would be covered in the dust of their rabbi.

Now let’s look at these calling of the disciple’s stories… first we have Simon and Andrew….and they are fishing…

They are not in school, they are not disciples….they are doing their job of being a fisherman.

And here comes Jesus and he says, “Lech Acharai”  “Come, follow me.”

Because Jesus is a rabbi!  Rabbis were the most respected people of the time.  The dream job circa 100 AD was to become a disciple so that you may grow up to be rabbi!  So when Jesus, a rabbi, calls them to follow him…of course they do!

In Matthew 16, Jesus takes his disciples to the region of Caesarea Philippi.  Now, this is not a great place to go if you were Jewish.  It is a pagan playground!

Now, this passage can have a few different interpretations.  The most common one theme is that when Peter confesses that Jesus is truly the Son of God, Jesus blesses him for this realization.  He then claims that “on this rock I will build my church” saying that Peter will be the anchor.  Other interpretations say that since Peter is the quota-quote spokesperson for the disciples, that he along with the other apostles are the rock that the church will be built on.

Now remember, these “rocks” that the church will be built on are the ones that did not quite make it as being disciples.  They are the average joes.

Rob Bell has another spin on this passage.  Bell talks about the location that Jesus is in.  Standing on a cliff where at the base of it, all these pagans are worshipping.  On the face of the cliff was a split that was called ‘The Gates of Hell” because this was where many believed to be the point at which the spirits would enter and leave the world.

It is while standing on this rock, looking down at these people, that Jesus says…this is the rock…

Bell says that it is not the high powered rabbis of the time that he will build his church on….it is these people…in this place.  And nothing not even the Gates of Hell will get in the way because it is commissioned by God!

When Jesus called his disciples, they left everything to follow him because they had faith in him…

Jesus is calling you…

He wants you to be his disciple…

He has faith in you…

May you be covered in the dust of your Rabbi!
Posted by Youngsters Theology at 3:23 PM No comments:

You are Exactly Who You are Supposed to Be

Such a funny word isn’t it…Epiphany.  We hear this word and we celebrate it in early January…but what do we actually know about this season?

We may just know that it is that season that follows Christmas.

We may know that the priest wears green during this time.

We may even know that it celebrates the arrival of the Magi at the birth of Jesus.

But there has to be a lot more to it, right?

Well, the literary definition states that an epiphany is the manifestation of Christ to the Gentiles as represented by the Magi.

But there still has to be a lot more that we can take away from it… that seems too…simple.

So a few weeks ago, I went to DuBose Conference Center to work at a High School retreat called Winterfest.  This was my third year to have the privilege of serving on staff for this 5 day long retreat.

The theme for the week came from Psalm 139, Because I am marvelously made!   Throughout the week we focused on the different ways that we see ourselves.  We started by spending sometime on how we see ourselves.

When we look in the mirror, what are the things that we see in ourselves?

Are they all good?

Are they all bad?

Are you happy with yourself?

These are difficult questions for anyone to answer, cause it does not matter what age you are…most of us will not have only nice things to say when you are judging and critiquing yourself.

I imagine that it may look a little bit like this...

But just because we may see ourselves one way that does not mean that is how everyone else sees us!

In the Epiphany story, we have the Magi coming to see Jesus.  They traveled from far away for a long time to come see Jesus.  Know I don’t think they would make that journey for any ole baby…do you?

They recognized something in Jesus, even from so far away….they knew there was something special going on and they had to be there.  So they went.

Jesus was two years old when the Magi arrived bearing their gifts…do you think Jesus fully knew and recognized who he really was?  I don’t know, but at two year olds, I find it hard to imagine for anyone to fully understand and grasp that concept…I am still trying to figure it out!

But the Magi saw something in Jesus…something that maybe even Jesus did not know.

YOU are the only one who focuses on these problems…

In Genesis, God creates us, man and woman, in the image of God… and afterwards saw all that God had made and said…”It is very good.”

The way we see ourselves is not the same as the way God sees us.

God sees past the surface, past our fears and doubts, past our insecurities…

All throughout the Bible we have story after story of God calling on his people to do something and time after time they say no!  They say no because they don’t see what God sees in them!

Moses refuses five times saying that he is not the right person, Jonah runs away, Jeremiah says he is too young, Isaiah says he is too sinful, Gideon is just flat out angry with God, Samson loses his faith, Paul says I can’t, not after what I did to them, Mary says why me, I am just a girl, and even Jesus is afraid and asks if he really has to go through with it.

If you look in the mirror and don’t think that you are the right person…or the best person…or that you can’t do something…or are too young…or too lost…too sinful….too scared….you are in GOOD company!

Repeatedly, God replies the same way… “Before I formed you in the womb I knew you, and before you were born I consecrated you; I appointed you a prophet to the nations” -Jeremiah 1:3.

So today, take some time and stand in front of a mirror.  See all of those fears and insecurities…visualize all those things that are keeping you from being the best you that you can be…

What are all those things that are holding you back from being great!

Those things will be there and will hold you back…but only if you let them.

This Epiphany, the season of light…remember that the light of the world is here with us today.

The light of the world is with you day in and day out.

When you stand there thinking of all those negative things…the light of the world is there.

Hopefully it doesn’t take some magi traveling from the east to help you realize that.
Posted by Youngsters Theology at 2:45 PM 1 comment: