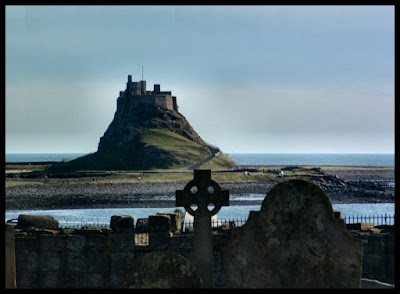 Today started pretty slow because everyone was tired from the night before. By now, everyone is close to one another, even if they didn’t know that many people before the trip. This has already led to people staying up until 4:30 having late night/early morning conversations (Not approved or recommended by any of the adult chaperones). However, conversation was limited from lack of sleep as we ate our mediocre hotel breakfast in McDonalds (Because you stayed up until 4:30 instead of sleeping, which was actually what we told you to do.  Mediocre?  It was a healthy balanced meal consisting of cereal, a nutra-grain bar, a muffin, and orange juice; plus whatever else you wanted to get from McDonald’s….Sounds pretty solid to me…). We finished our breakfast, gathered our things, and boarded the bus for the day. We were going to the Holy Island of Lindisfarne. Lindisfarne is an Island off the coast of England where St. Cuthbert started his monastery and then eventually died. Now it is a holy ground for pilgrims to venture to gain a greater relationship with God. Lindisfarne is believed to be a thin place—a place where the barrier between you and God is thin. As we came into the island and into St. Mary’s Church on holy ground, we came to this thin place. Hester led us through a service in the church  (We celebrated the Eucharist in the same place that St. Cuthbert and St. Aidan would have done so many years ago.) , which was built on the same ground that the church St. Cuthbert built was on. After the service, we split up into our small groups and explored parts of the island. My small group explored the ruins of the priory of St. Cuthbert and his followers. Then we climbed to one of the high points of the island and looked out onto the whole island and back to the mainland. After that we climbed down to go to lunch in a small café. After lunch, we did Lectio Divina with our small groups and then came together to build a cairn. A cairn is a pile of rocks that marks where pilgrims have been. Then we divided up and one group went back to sit and talk in a café, another group, only consisting of David went to check out the castle (which was actually closed), and the other went on a hike around the island. I went on the hike and had a nice conversation with Wesley and Charlie. We finished our hike and then got on the bus and left Lindisfarne. We ate dinner at a pizza place and then went to McDonald’s to do Compline. After Compline, we went back to our rooms where I had a short wrestling match with Andrew (Again, not recommended or approved by any chaperones) and then went to bed.

Henry
Posted by Youngsters Theology at 12:15 AM