On Sundays, We Go to Church. 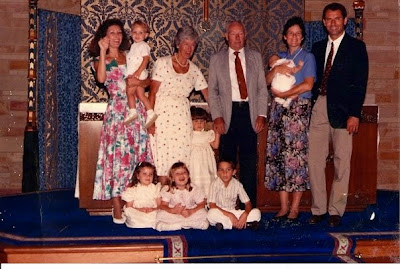 Just like every Tuesday, I sat at my desk trying to think of a topic to write about.  Luckily I had some visitors in my office that helped me out.  They began asking me questions about people that I have met and how they come to be Christian.

I thought about this for a bit and realized that the story that I know best is my own.

So, here it goes, the story of how I became a Christian.  It is not always a pleasant story full of smiles.  It was and still is a long journey; a struggle many times that made me question and doubt.

The simple answer to the question is that I am a cradle Episcopalian.  Baptized in 1989 by my Godfather, The Rev. Dwight Helt at St. John’s Episcopal Church in Duncan, Oklahoma. (Pictured above, my mother, aunt, and uncle, my oldest sister, my cousin, and then all the candidates for baptism, myself (the cute blonde on the left), my sister, and my two cousins)   Then later went through Confirmation in 1996 and was confirmed by the Right Rev. Gary Coleman at St. George’s Episcopal Church.  From that perspective…I have always been a Christian.

But just like that classic Billy Mays catch phrase….there’s more.

While my mother was the one who would take me and my 2 sisters to church, my father would go play golf.  He was and still is not the most religious person you will meet.  When you grow up as a church goer, you act like a church goer.  And me being the stubborn young man that I was…often disagreed with my father, especially when it came to religion.

As I got older, my sister’s became more and more involved in the youth programs at our church, St. George’s.  At the time I was too young, but was always dragged along to drop them off and pick them up.  I was that little kid who was not old enough to be in youth group but desperately wanted to.

When I did start going to youth group, I was hooked.  I instantly became very involved and active in just about every single thing you could at the church.  Even at one point dressed as Buddy the Elf, yellow tights and all, and danced around the Nave during announcements screaming that Santa was coming and that everyone should come to the Christmas Carnival that the youth were hosting.

Then there was that other side of me.  I would then go to school and I was the quiet shy kid.

Church was my outlet.  It was my home away from home.

I also remember the pain and struggle of when our youth group at St. George’s fell apart.  Our strong proud program had become 3 people who met twice a week to talk about what we could do to save our program…but we finally realized we were fighting a losing battle.

The rest is history as they would say.  I became very involved with the youth group at Holy Communion until I went to college.  Stayed connected and involved in the church throughout college and then got offered this job to work here!

But behind the scenes…but how did I become a Christian?

To be honest, I would have to go back to the basic act of my mother taking me to church when I was younger.  That was the first building block.  But there are many others.

I look back at my disagreements with my father over whether or not God even existed.  Even at such a young age…I was so adamant in my stance that God was real!  Whether or not this was because I had such a strong belief at the time or I just was really good at disagreeing with my dad, we may never know.

Now, while thinking through this, I even went back to some of the reflections I wrote and gave when I was younger.  There is always one common thread in all of them.  It was the people that made church what is was for me.  I did not go for “church”.  I went because I loved being in that atmosphere.

While that side of my Christian life was going great, I struggled with other sides of it.

I am a firm believer that as we grow up, so does our relationship with God.  For the longest time, saying that I was a Christian was good enough.  Just going to church, even if for the wrong reasons, worked fine for me, but then I wanted more.

I was hungry for something else but did not know how to go about it.  I began to doubt and argue with God.  Even spent so much time so angry at God for not providing me with answers or not guiding me.  I essentially turned my back on the God side of the church and solely went to be with my friends.

This continued for a little bit until I was challenged again.  I was asked why I said these things in church if I did not know what I was saying.  If I was just saying them and I didn’t believe them, then I was a liar.  That it would be better to not say these things than to say it with an empty heart.  For some reason, as a 17 year old high school student, I took this very personally.

I slowly began to work my way back to fixing my relationship with God.

It wasn’t easy.  It took a lot of time.  And it is not like a run where you there is a set finish line.  You do not go a certain distance and then collect your medal that says ‘You are now a Christian!”

I don’t know the answers.  I struggle with my faith on a regular basis.  Some days I feel very close to God and some days a feel very distant.  My relationship with God and the church is constantly changing and evolving as I grow and change as a person.  What my faith looks like now is not what it looked last month and is not what it will look like next month….it is always changing and growing and evolving.

It is a constant journey and often times a struggle.  It is challenging.  It is difficult.  It forces me to question myself and ask if I am living right and doing things the right way?

But why do I do it then?

Because it is important to me.  It is something I care about and what to do.  Because when I was younger…it was something my mother instilled in me.

On Sundays…we go to church.

That was what I was taught as a child.  That was my first step on the journey.

That was where it all began.
Posted by Youngsters Theology at 3:11 PM